VPD Sergeant Terry Parmar grew up in East Vancouver and regularly participated in youth programs, including drop-in floor hockey, at Hastings Community Centre. His family was similar to many in that neighbourhood – it was difficult to afford access to organized league sports like ice hockey, so instead they took advantage of the youth programs at the local community centre.

It wasn’t long before Terry advanced from being a regular participant to becoming a youth volunteer. This eventually grew into employment at Hastings Community Centre where Terry led various youth programs and developed many important, positive connects with the youth in that community. Fast forward a few years, Terry became a Vancouver Police officer and continued to look for opportunities to support the vulnerable kids in that neighbourhood.

In partnership with Hastings Community Centre, and with funding from the Vancouver Police Foundation, Terry launched Floor Hockey for Kids in the fall of 2021. Approximately 20 kids aged 9-12 attend this free after-school program every Thursday afternoon. Terry volunteers 100% of his time to coordinate and attend the Floor Hockey for Kids program each week.

“This program is a way for me to give back to the community that supported me when I was young,” explains Terry.

“The kids come to the community centre every Thursday after school to play floor hockey with us. They gain life-skills, build positive and valuable relationships with their peers and adult mentors, and they learn to play Canada’s favourite game. All youth who attend are also provided with a free healthy meal before heading home for the evening.”

The grant from the Vancouver Police Foundation enabled Terry to purchase new floor hockey equipment for Hastings Community Centre – including proper goalie equipment – to replace the worn-out and very dated equipment that was previously there. Funding also provided each participant with a custom program t-shirt and a hearty after-school meal.

“This particular neighbourhood has become gentrified over the years,” says Terry. “Some families have the means to enroll their kids in ice hockey, but many still can’t. This program helps integrate low income and first-generation Canadians into an activity that is a huge part of the local, Canadian experience. It creates a feeling of inclusivity around having access to learning the game of hockey.”

Terry will also tell you that this program is about much more than the game of hockey. It is also about the kids forming long-lasting friendships with other kids their age and developing meaningful connections with adult mentors. Many of the regular floor hockey program volunteers are VPD Special Constables. VPD Patrol officers also visit the program from time to time to engage with the kids in an open and encouraging environment.

“Paying it forward is so important. Being a police officer puts me in a unique position to be able to leverage my knowledge and experience to not only seek donations and support for this program, but also be able to actually develop and run the program.” 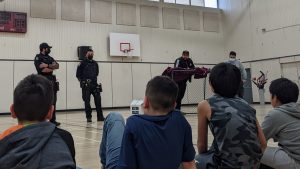 The future of Floor Hockey for Kids is bright. With funding from the Foundation already confirmed to operate the program again during the 2022/2023 school year, Terry also has intentions to expand the program model to other nearby Vancouver community centres in order to provide the same opportunity to even more youth.

“I am going to continue to work hard to give these kids what they need and to ensure they have more opportunities than I did when I was a kid growing up that same neighbourhood. I also work hard in hopes of inspiring these kids to want to give back to their community when they grow up.”

As a kid, the experience Terry had participating in similar programs at the community centre had a profoundly positive impact on him at a pivotal time in his life. It was a time he could have easily been influenced to make very different, and potentially dangerous decisions, about his activities and future. This is why he is not only committed to providing the same support to the next generation, but he is also extremely grateful to the donors who make it all possible.

“Thank you so much to the supportive donors. Without you, this program and many others just wouldn’t be possible. The kids and the parents truly appreciate the funding and the generosity. I couldn’t offer this program without the Vancouver Police Foundation and its donors.”

If you would like to donate to support Floor Hockey for Kids or any other VPD officer-initiated community program, please donate online or call us at 604.717.3700. Gifts of all sizes can make a difference.